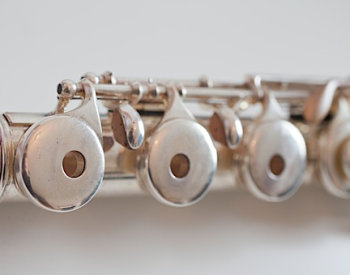 Baffled by the different types of alto flutes available? Carla Rees gives an outline of the three main options.
Like the C flute, there are essentially three main types of alto flute; the standard closed hole alto, the open hole alto and the Kingma System alto. All come with either curved or straight headjoints and footjoints to low C (sounding the G below). Some makers offer B footjoints (sounding as low F sharp) but this is still relatively unusual.

1. Standard (closed-hole) alto flute
The majority of alto flutes have closed holes and C footjoints. This is the form of the instrument as Theobald Boehm first produced it, although the modern instrument has a slightly modified mechanism to allow for more comfortable hand positions. Different makers have slightly different approaches to scale, bore size and key placements, and tone and response can also vary between makes. The left hand fingers mostly operate lever keys rather than the keys covering the tone holes themselves, reducing the stretch for the hands and allowing for more comfortable posture. The right hand keys are usually equipped with touchplates on the keys to guide the hands into (usually) comfortable positions.

The closed holes mean the instrument has a number of limitations in terms of contemporary techniques, such as a reduced number of number of multiphonic possibilities, alternative fingerings and timbral trills. Also, the different bore sizes and key configurations between makers mean that a technique that works well on one instrument may be less effective, or even impossible on another. Microtones can be achieved through modified fingerings and pitch bends, though tone, intonation and dynamic response can be variable. A closed hole instrument is a good starting point and ideal for use in flute choirs, as well as well suited for the majority of solo repertoire and ensemble work.

2. Open-hole alto flutes
A very small number of makers (most notably Eva Kingma) offer open-hole options on alto flutes. These are still quite rare but increasing in popularity. The five open holes provide a greater range of possibilities of contemporary techniques, similar to the open hole C flute. The holes themselves are often slightly smaller than one might expect, so that they can be easily covered by the fingers, and are given off-set positions on the keys to allow for comfortable hand positions. As the left hand fingers are required to cover holes in the A and G keys, the stretch for the left arm is slightly more than on a closed hole instrument. However, by removing all of the additional levers, the mechanism is much more streamlined, making this the lightest of all types of alto flute. My experience is also that the open holes help speed up the response of the instrument and contribute towards a richer, more resonant sound. Open hole altos are ideal for professional solo and ensemble work.

3. Kingma System alto flutes
The Kingma System, created by and named after Dutch flute maker Eva Kingma, has revolutionised the flute family for the 21st century. The Kingma System alto essentially has an open hole on every key; five of these open holes are covered directly by the fingers, while the others are closed by small keys (the patented ‘key on key’ system) and operated by levers. The instrument also has a C sharp trill key. Kingma System instruments are often referred to as ‘quartertone flutes’, because they are capable of producing even-toned and well-tuned quartertones across the range of the instrument (the smaller central holes create quartertone pitches, while the large outer holes create semitones). While this is undoubtedly an important aspect of the instrument, there are further advantages too. These instruments have a vastly increased range of multiphonics, alternate fingerings, timbral trills and other extended techniques (see www.altoflute.co.uk for further information on the extended techniques capabilities of Kingma System alto flutes). The additional keywork means that Kingma System altos are a little heavier than standard instruments, but the advantages in tone and response more than make up for it. These instruments are ideal for contemporary repertoire, and have a burgeoning repertoire of works which make use of the additional keys (see Kingma System repertoire). However, they can also be used for all other types of playing, and further uses of the additional keys include playing in world music styles, as well as baroque temperaments. I have been using a Kingma System alto flute as my main instrument since 2000, and find that it is ideally suited to all repertoire, from baroque transcriptions to contemporary.

Carla's website
Contact us with any questions or to book a lesson with Carla.
Click here for details of rarescale’s summer school for flute players and composers