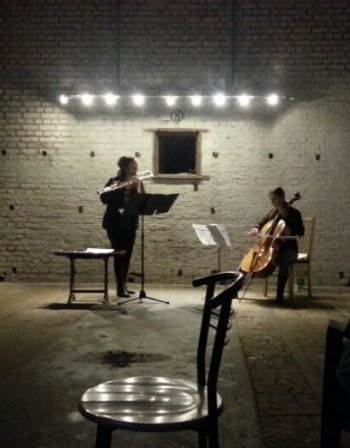 Composer of the Week: Katrina Emtage

Tell us a little about your background
From the moment my parents bought our first piano at an auction in a paddock in rural NSW when I was 7, I knew that I'd found something that would interest and sustain me throughout my life. Then I discovered the flute through the school music education program, first the Bb flute and then 'concert' flute, what a beautiful sound! I practiced hard and was accepted into the Sydney Conservatorium of Music High School. I then joined the Sydney Youth Orchestra and Australian Youth orchestra, played casually in the Australian Chamber Orchestra and formed my own chamber group with strings and guitar. After Sydney I went to Vienna in 1988 to further my studies with the aid of Queen Elizabeth II and Big Brother scholarships. I lived there until 2001. Vienna in the 90's was a city living through the fall of the Berlin Wall, a city that was being revived as a natural hub of Central European culture. Whilst there I played with many contemporary music ensembles, mostly with Klangforum Wien. My teacher, Wolfgang Schulz, very kindly allowed me to borrow his alto flute numerous times until eventually I was able to save up enough to buy my own.

In 2001 I moved to Ireland and met my husband, Irish melodeon player and sailor Dave Hennessy. After a small break working for Apple in Cork I decided that the corporate world was not for me and I went back to playing and teaching flute at the Cork School of Music. I bought my own bass flute in 2007.

Where did you first hear low flutes?
At 13 I was given an alto flute to play in flute quartet - Marc Berthomieu's Chats - and I fell in love with it's velvety low register.
Low flutes had been discovered by Hollywood, used in soundtracks from the Pink Panther to James Bond, they were quite the flavour of the day, I started noticing them. One of my teachers at the time, Geoffrey Collins, played in a contemporary music ensemble that premiered a number of works by Australian composers including Kakan by Anne Boyd for alto flute, marimba and piano.

What have been your career highlights so far?
As a founding member of the Vienna Pocket Opera I really enjoyed putting together many productions including Maxwell-Davies Resurrection, Britten's chamber operas and working with composers on new works. With Klangforum Wien I played the premiere of Berio's opera Cronaca del Luogo at the Salzburg Festival and I really enjoyed playing a staged production of Pierrot Lunaire with them at the Guggenheim museum in New York. One of their more impressive projects for me was a collaboration with James Tenney in his work " in a large open space" using the Gothic Minoritenkirche in Stein, Krems as one large instrument resonating with a harmonic structure that you could walk through. After becoming involved in learning Irish traditional music I increasingly also began to improvise. Playing by ear really increased my awareness of all the music I was playing and that's when I started writing my own music. I wrote a piece for flute and bassoon, mostly improvised, the premiere of which was recorded by Austrian Radio. When they rebroadcast it as a "pick of the week" I was delighted by the positive reaction it received, although it took a few years for me to write it down! Meeting an old school friend in Ireland who plays cello was the impetus to transcribe this piece, I then created a version called Wind on Waves for flute and cello. I was very excited to be given the opportunity to make a music video of it in 2013, you can still view it here: https://vimeo.com/69148724

What are your current projects?
In July 2013 my husband and I set sail on a journey around the world on our 44 ft monohull Laragh. We've come 26 000 miles so far across the Atlantic, through the Carribbean, across the jPacific to New Zealand and Australia and then the last few months through Indonesia and Malaysia to Thailand where we now are. It's been an amazing experience, not without it's lows and highs. One low point involved a wave crashing over the boat and into the cabin killing my brave computer. High points have been listening to some fantastic local musicians and sometimes being able to have some musical interchange with them. Even if we can't speak the same language we can still play and appreciate!

What are your future plans?
I am looking forward to getting back to my friends in CAFE (Cork Adult Flute Ensemble) and doing some new arrangements and pieces for them and I'm currently working on a piece for alto flute and cello.

Can you tell us a little bit about one of your pieces?
Nightfire came to me as an idea around Halloween in Ireland, 2011. The evenings were drawing in earlier and fires burning leaves were still visible in the dusk. This reminded me of my childhood in the mountains of NSW when we used to have bonfires in the winter on a remote farm. The eucalypt bark would spark and the logs would crack off each other. In the initial exchange between bass flute and cello I tried to capture that same energy and sparking off one another.
The middle section to me is an experience of looking away from the fire and out into the vast space of the night sky with the drone of the earth reverberating beneath you. The final section is then being drawn back into to the fire and the spiralling of the flames before extinction.
In March 2013 Nightfire was awarded the 1st prize in the freescores.com new instrumental duet contest. The bass flute could be amplified to improve the balance between the instruments.

How would you recommend someone approaches learning the piece?
For Nightfire I would work on the first section away from the flute practicing saying the articulation in rhythm (with a metronome)
Then the dynamics are very important so I would work on getting good even crecendos and diminuendos.
The last section is based on a pentatonic scale of CD FGA so I would practice this scale as a warm up.

Links
Music video of my piece Wind on Waves for flute and cello:
My YouTube channel
https://www.youtube.com/user/katemtage
Nightfire on SoundCloud
Our sailing blog since July 2013