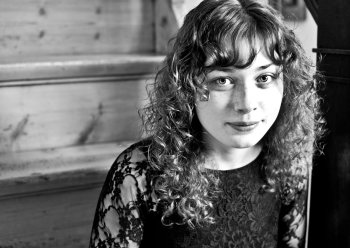 Lilja María Ásmundsdóttir is an artist, composer and pianist from Reykjavík, Iceland. From 2017 to 2018 she studied masters in composition at City, University of London with Claudia Molitor. In the past, she has attended tutorials with composers such as John A. Speight, Jennifer Walshe, Newton Armstrong and Tullis Rennie.

In her works she likes to explore the connections between different art forms, mainly visual arts and music. She explores the making of sound sculptures, audio-visual installations and the role of the performer in relation to interdisciplinary practices.

In 2016 she did an internship with the pianist and inventor, Sarah Nicolls. The internship focused on the creation of musical sculptures and installations. That same year, Lilja received a grant from the Icelandic Student Innovation Fund to develop her sound and light sculpture Hulda, under the supervision of Berglind María Tómasdóttir, associate professor in contemporary music performance at Iceland Academy of the Arts and Jón Marinó Jónsson, violin maker. The project was one of five projects nominated for the Icelandic President’s Innovation Award.

Lilja holds a BMus degree in piano performance from the Iceland Academy of the Arts. As a performer she has focused on the 20th and 21st century repertoire. Her performances include premiering pieces by many young composers and performing Piano Concerto in G by Maurice Ravel with the Iceland Symphony Orchestra as one of the winners of the competition Young Soloists 2015. She is also a part of the Icelandic art ensemble Hlökk.

and burn like the bird into eternity...
Next
Previous