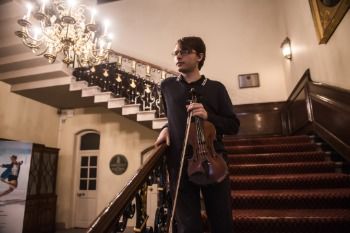 John Sturt is an English composer born in 1995 to a musical family in East Sussex, UK. He took up the violin in 2001 at the age of six. In 2006, John’s life took a surprising turn when he was diagnosed with Hodgkins Lymphoma (a Cancer of the Lymph nodes), which meant taking a year off of school.

In 2009, John wrote his first piece of music – a piano piece. He set himself for sure on the path of becoming a composer when he started having composition lessons with the composer and oboist Robert Hinchcliffe in 2011. In 2014, John took up studies at the Trinity Laban Conservatoire of Music and Dance in London, where he studied with Dr Deirdre Gribbin, Dr Paul Newland, Errollyn Wallen MBE, Dr Stephen Montague and Soosan Lolavar.

John’s range of compositions show great versatility: he has written for solo instruments, electronics, Chamber ensembles (including the Piatti String Quartet) and full orchestra. John’s career highlights include working with the celebrated poet John Agard in 2014, winning joint prize in the 2017 Ludlow English Song Weekend Composition Competition, being one of the artists in residence for the 2018 Tallis Festival, winning the Trinity Laban Silver Medal for Composition, conducting the premiere of his orchestral/vocal cantata Beyond the Cradle of Humanity in 2018, and having his work featured in the 2019 Leeds Lieder Festival.


Wishing for a Sleep
Next
Previous