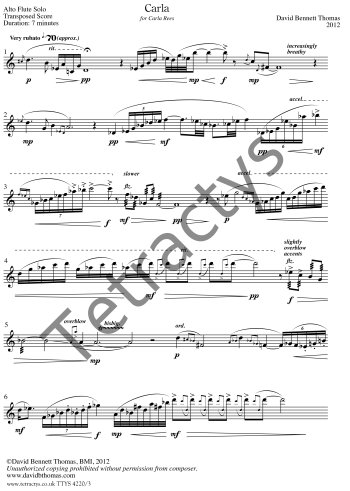 
Carla was composed in the winter of 2012 for the great musician Carla Rees, for whom I've written many times before. Having gotten to know Carla's playing over the years, as well as having learned the nature of the alto flute, I endeavoured to put together a piece that would exploit both to the best of my ability. Among my favourite sounds that Carla makes are the beautifully moody and atmospheric colours of the low flutes in which she specializes. It's rather easy to write for her, because she makes everything work with a deep sense of interpretation and purpose. It is always a pleasure (and any composer's dream) to have her play my notes.