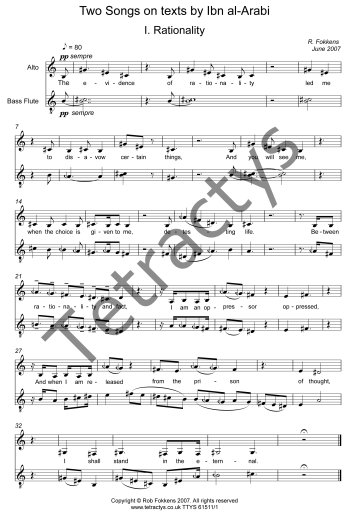 1. Rationality
The evidence of rationality led me to disavow certain things,
And you will see me, when the choice is given to me, detesting life.
Between rationality and fact I am an oppressor oppressed,
And when I am released from the prison of thought, I shall stand in the eternal.

2. Grief
I have no wine except griefs mixed in a glass with pouring tears.

These two short meditations on texts by Ibn al-Arabi – translated by Federico Corriente and Ed Emery - were written for Rosie Coad (soprano) and Carla Rees (bass flute) of rarescale, and premiered by them in June 2007.