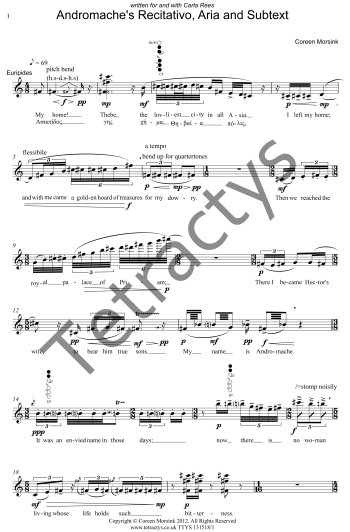 
Andromache's Recitativo, Aria and Subtext is a "song" for alto flute, where the words are played rather than sung. The original version is for Kingma System quartertone alto flute, and a version for standard, closed-hole alto flute, is also available, which has been appropriately modified to suit the instrument. The recitativo follows the example of ancient Greek music using the text as a basis for the notes and rhythm. The Aria moves away from direct use of speech-rhythm but still uses the number of syllables as a means of ordering the phrases. The text is then reflected by the music. The subtext is where the characters get to play out their "real" emotions. These are the thoughts of Andromache, Hermione and the Goddess Thetis, who are the main female characters of Euripides’ "Andromache". Andromache and Hermione are the victims of society and war, frustrated and hoping for something better in life. Thetis is the cold Goddess looking disdainfully at the situation.

With any reprint of the text (for example in programme notes/sleeve notes) please include the following: 'Text reproduced with permission of The Society of Authors as the literary representative of the Estate of Philip Vellacott.'