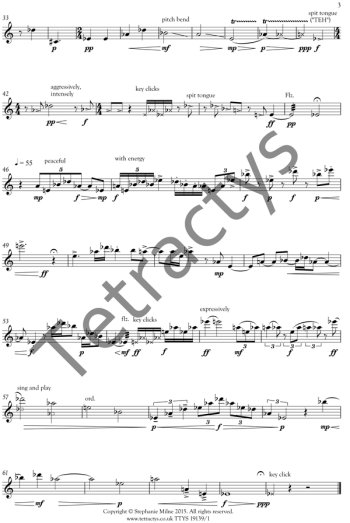 
Shadows was composed in June 2015 for Carla Rees and is the first of a number of new works to be written for her contrabass flute. The work is inspired by the dark and mystical tone of the instrument. The low register is explored in the first half of the piece, beginning with semibreves, highlighting the five note tone row on which the piece is based. The contrabass’s upper register is also presented towards the end of the work, enabling the ideas of light and dark to be contrasted.

Milne has worked with Carla Rees to allow an understanding of the instrument’s capabilities; this is demonstrated in the use of a number of extended techniques. Key clicks and pitch bends highlight the murky atmosphere of the piece as well as giving it a more percussive dimension. The performer must pay close attention to the detailed dynamic and articulation markings, as it is these that allow the performer to become fully immersed in the work’s obscurities.
S.Milne 2015