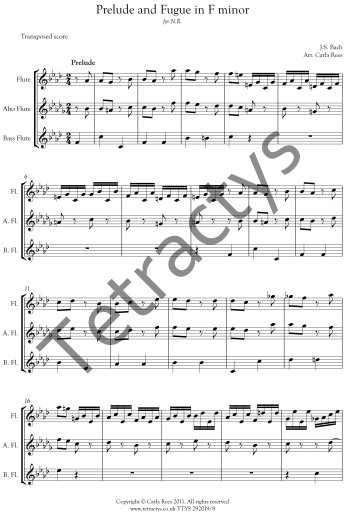 This piece comes from the second book of the Wohltemperierte Clavier (Well Tempered Clavier), a collection of 48 preludes and fugues for keyboard by Bach which cycles all of the major and minor keys twice, in a demonstration that in moving towards equal temperament it was possible to perform music in every key.

The Prelude theme is followed by a number of variations on the initial idea, providing changes of texture and modulations into different keys. The 3 voice fugue which follows is based upon a four bar subject which is heard in all of the parts.

This arrangement for piccolo, flute and alto flute allows the distinctive timbre of each of the different sized flutes to lend clarity to the individual lines, without dramatically altering the overall character of the music.