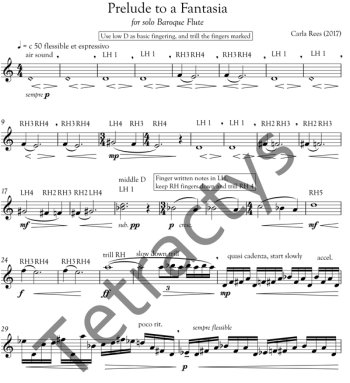 Carla Rees - Prelude to a Fantasia

Written to be performed by the composer at Benjamin Tassie’s Classical Remix event at Iklectik, London on 3rd June 2017, this short piece for solo baroque flute draws on influences from the baroque and contemporary worlds. The baroque flute is strongly centred on D, so the pieces fluctuates between minor and major thirds, as well as featuring the natural intonation of the instrument through the use of trills, which are also an important feature in baroque repertoire. A short central cadenza-like section takes its influence from Telemann’s Fantasias, some of which were programmed alongside this piece at the first performance.