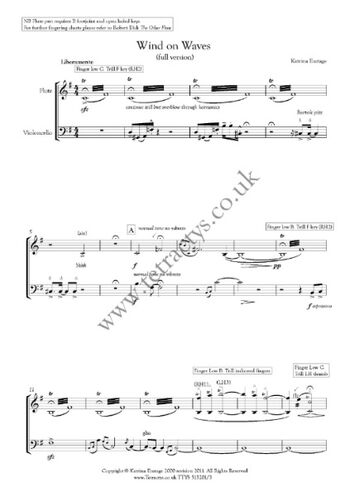 In Wind on Waves for flute and cello, an evocative sound world is created in the introduction with swirls of harmonics forming the background for a languorous cello melody. This then leads to a dance-like riff over which first the flute and then the cello improvise. Over a foundation tone of B, multiphonics, glissandi and bisbigliando in the flute part reference the sound world of the shakuhachi whilst the use of the hirajoshi scale suggests the koto.

Originally conceived after returning from a tour of Japan as a flute and bassoon duo, it was premiered in a live broadcast for Blue Danube Radio from Funkhaus Wien (Radio house Vienna) in March 2000 with Katrina Emtage (flute) and Lorelei Dowling (bassoon). This version with cello was first performed by Ilse de Ziah (cello) and Katrina Emtage (flute) at the CIT Cork School of Music in Ireland in 2008 and revised again in 2013 for a music video which can be viewed here.