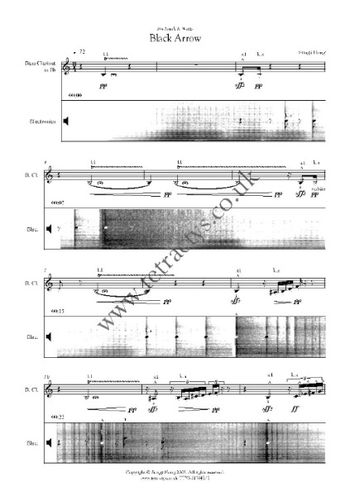 
In Black Arrow, written for bass clarinet and electronics, bass clarinet solo part consists of three ideas as follows: the quiet timbral trills, abrupt slap tongues in low register and ghostly fleeting key slap scales. The whole piece develops around or between these three gestures turning on themselves or going through transformations. The latent energy seems to waver in a very low register but gradually the sounds creates a space filled with a strong directional kinetic energy. The succession of rising scales, lofty multiphonics and huge intervallic portamenti intensify the energy and constantly keep up the extreme tension.

The source of the sound comes only from bass clarinet in order to create unified sonic world between the electronic part and instrumental part. The electronic part of the piece realized at the electroacoustic music studio at the University of York and at the composer’s home studio.

Black Arrow was completed on the Greek island of Crete in early 2005 and received its first performance on 11 March 2006 at the International Electroacoustic Music Festival Spring in Havana, Cuba. It lasts about 7 minutes.

The piece is dedicated to Sarah K Watts.