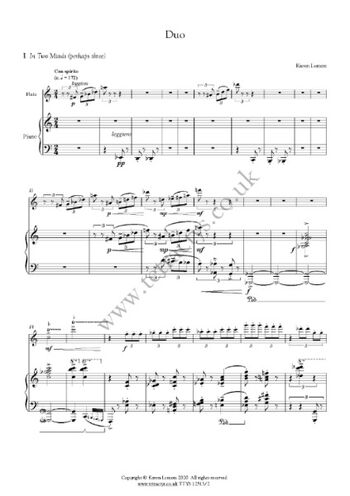 
The piece is in three movements:
I: In Two Minds (perhaps three)
II: Two Hearts
III: With One Voice (but still in two minds) (or three) (four even)

“We are of one mind” … “Two hearts beat as one” … “We sing with one voice” … Really? We are each of us unique and wonderous beings, and no matter how closely one engages with another, as is desirable when playing a duo, one will never be, or be part of, the other. We retain our distinctness, and this is a marvellous thing. Any sense of “oneness” is at best approximate.

In the first movement, we are brave enough and trusting enough to bare our differences, our “two minds”. Though even within ourselves we are sometimes in two minds, so perhaps there are three … In the second movement, we may dance together entwined, but we nevertheless remain “two hearts”. In the third movement, we may sing in unison, in “one voice”, but we are ever two minds. Or in three minds. Or in four …

To be played with love and respect, each for the other.