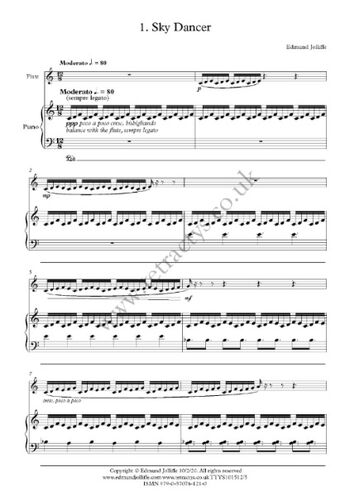 This piece is inspired by three of the birds on the red list. These are birds listed as being endangered in the UK by the RSPB.

1) Sky Dancer: This music is inspired by the Hen Harrier. The male performs a sky dance over and over again to attract a female. The music is made up of little patterns that are not quite synchronised. Towards the end of the movement, they come closer together and ultimately connect.

2) The Lesser Spotted Woodpecker: This is inspired by the drilling of the bird and also its habit of hopping back and forth on tree branches.

3) The Cuckoo: This is based on a folk song 'The Cuckoo is a pretty bird' though the folk song is not heard in its entirety until the very end. When it is heard, the piano effectively takes over and destroys the folk song.

The Red Birds was commissioned by the Animo Duo in 2019 and is dedicated to them.