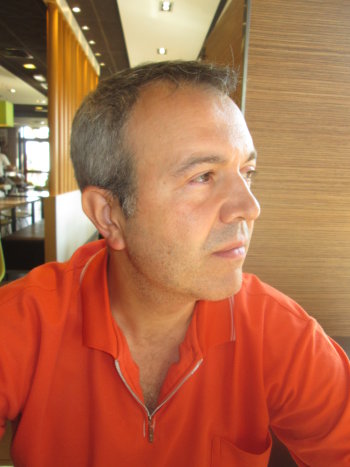 
I’m going to record a concept album called Monsters, some time in the future. Same Old Monsters will be the main composition, along with Bardhezi, for unaccompanied voice, with which it forms a diptych about Evil.

Bardhezi (an Albanian word meaning “Black and white”), for unaccompanied voice, is about the astonishment we experience when we are facing an act of primitive and absolute violence accomplished by those who seem incapable of so much wickedness. The whiteness of the snow may contain the black of evil, the fall of man remains etched in the snow like an indelible stain. The text refers to the ambiguous nature of the snow; it’s white, freezes nature and protects, changes, makes the journey difficult and unstable.

Regarding Same Old Monsters, the title suggests that the characteristics of human violence, oppression and malice are the same over the centuries. The idea of the piece is an activity that requires attention, delicacy and commitment (the bass flute part, with its rhythmic intricacies, quarter tones and multiphonics), opposed to the obtuse brutality of the Same Old Monsters. Our antihero tries to resist and to fight back, but at the end gives up, and his voice becomes nothing but an inarticulate babble.

The first musical idea of the piece was the four-note theme that opens the flute part: B Bb E G; in other terms: H.B.E.G., that stands for Happy Birthday, Ela Gusha, and this refers to the author of Bardhezi lyrics, the poetess (Su)ela Gusha.

In Same Old Monsters, I used microtones to symbolize the uncertainty and difficulty that our anti-hero has in trying to express his/her thoughts and to assert himself/herself against the brute violence of the monsters. Besides, I love the sound of microtonal inflections of the line… The tape is the voice of the monsters. I made it using real instruments sounds, modified with various techniques and mixed with electronically processed animal sounds.

Same Old Monsters was written in 2009 for Kingma System Bass Flute and electronics. The piece is dedicated to Carla Rees, for whom it was written. The final version of the score was done with technical supervision by Carla.

A recording of this work was made in May 2011, while the première of the piece was held in East London, at The Macbeth, on July 3rd 2013, during a very special event of London’s ‘alternative classical’ scene hosted by Nonclassical.

Order the score and hear a recording here

See also the interview with Danhere