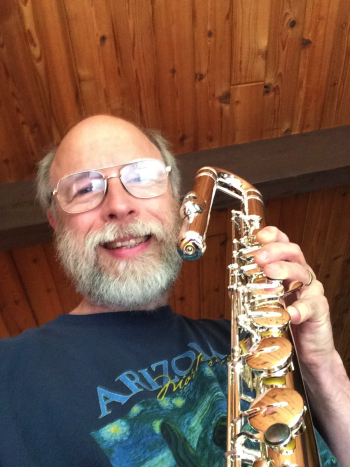 Composer of the Week: Jonathan Cohen

Tell us a little about your background
Well, I’m an odd one, and came to music and composing much later than most. I have a PhD in electrical engineering, and have been happily practicing that for four decades. But in my 40s I picked up the flute and began an honest stab at learning to read music as opposed to just acting by ear. I’m still working on the flute and reading, of course, but I don’t embarrass myself quite as often as I used to.

My composing began in 2003 when I was confined to my house for three days by snow. My flute choir (Flutes on the Brink) made the mistake of encouraging me, and performed my first piece Helen’s Backyard, where it was heard by a composer who badgered me into seeking a publisher. Inexplicably, I found one, and many more pieces followed. When I heard that something called the Professional Flute Choir was going to perform one of my compositions at something called the 2005 NFA Convention, I thought I ought to go. I was immediately hooked and found myself swept into the joy of the international flute community. They are a very tolerant group.

Early in my flute choir days, I found myself drawn to low flutes: they looked cool, they sounded great, they played an interesting part in the ensemble, and — to be candid — I liked the fact that they were often asked for less velocity. I started with the gateway drug of the bass and moved on to “Tiny,” my contrabass. So now I write very interesting parts for low flutes (both by themselves and in flute choir pieces) and find that I have to work very hard to play my own music properly. So much for low flutes being easier.

Now I find my life dominated by music. I’ve got some 30 pieces published, I am involved with the NFA’s Low Flute Committee, am asked to play in many groups (desperate for a contra, not for me) at conventions, and am astonished and grateful that I am allowed to hang out with the cool kids.

What have your career highlights been so far?
I have been lucky enough to get one each of the recognitions offered by the NFA’s annual New Music Competition: Winner, Finalist, and Honorable Mention. And I was terrifically honoured by having eight of my pieces performed at the last NFA convention. But the biggest highlights are the moments of recognition and fellowship I get by being asked to play with groups, to offer seminars, and to write music on commission. And I have to add this: Having Peter Sheridan premiere the piece Albisiphonics that I wrote for him at the NFA Convention this last summer was glorious!

What are your current projects?
I have just completed a trio for alto, bass, and contra, commission by the NFA Low Flute Committee, called Temperamental Triode. And I’m working on a commission by Darrin Thaves of the Pacific Flute Ensemble that they will premiere at the upcoming convention also; they are a tremendous group.

What are your future plans?
I’d like to add some more orchestral works and compositions for symphonic band to my catalog. I have some work done in that direction, but have to see if they are again overtaken by commissioned flute pieces. In the meantime, I still have a lot of pieces in the pipeline to finish and get out the door!

Can you tell us a little bit about one of your pieces?
One of my recent additions to Tetractys’ Library is Legend of Llyn Llech Owain, a composition for low flute ensemble commissioned by the NFA’s Low Flute Committee. It tells one of the many stories of the picturesque lake of that name in Wales. Mixing Elvin magic, a knight of King Arthur’s court, and a great story, it tells of the origin of the lake when Sir Owain drank from an enchanted spring to rescue himself from the brink of death, only to collapse and fail to cap the spring. The spring filled a verdant valley and formed the now-placid lake.

The piece begins with a peaceful description of the lake in its valley, first a duet between one alto and bass, then expanding into the full ensemble to the encompass the whole valley. Then Sir Owain and his horse return from battle, barely alive, in a dirge-like 5. He recalls the enchanted spring, known to him as a youth, reaches it and removes the flagstone to drink. Slowly and quietly, the water begins to work its magic in 3+2+2 rhythm, building in intensity until he is fully restored as the chords rise in pitch and harmony, finally dissipating as he collapses, whole but exhausted. Left uncapped, and with the knight asleep, the enchanted water escapes in syncopated mischief, timidly at first, then growing, boiling, and swirling as it fills the valley with abandon, then calming and settling into the placid lake that we now see. We are left again with the peaceful setting, moving down through the instruments to end with a duet of contras.

How would you recommend someone approaches learning the piece?
Play it!