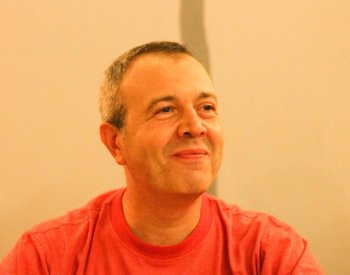 Tell us a little about your background
I studied with various teachers, definitely not famous or "à la page", but highly knowledgeable and tradition-bound. A lot of "straight" teachings from which I have drawn great benefit especially regarding counterpoint, rhythmic complexity and careful study of the peculiarities of each instrument, not only with regard to the timbre, but also to technical and even mechanical characteristics. From Perotinus to the threshold of the Twentieth Century. I discovered the rest alone... I'm not the classic student who writes as his "Grande Maestro", subdued, so to speak, by his cumbersome personality, and I think this has been beneficial to my style, in which of course you can glimpse more or less evident references and influences, but which I think remains quite original. Besides, I’ve been working as an organist, liturgical and rock (mostly hard rock, God bless Jon Lord!) for years, and this experience has surely provided additional elements to my way of composing.

What have your career highlights been so far?
I would say my CD Reification, the result of a very interesting collaboration with the great clarinetist Marco Colonna, a project in which I tested my abilities as a composer of electronic music, the Same Old Monsters project with Carla Rees, or the "residency" in Sardinia with Ensemble Spaziomusica from Cagliari. More generally, I think I’m getting a "highlight" whenever a great soloist or an ensemble understands and appreciates what I write and decides that it’s worth performing around the world... It happened several times in the past, it’s happening at this time and I hope it will continue to happen in the future, at least for some time…

Tell us something about your current work
I am currently composing two pieces at the same time: "Joyce was a synthesizer" for contrabass flute and electric guitar, and "Hidden in Plain Sight" for ten-string guitar. Incidentally, we could make a digression about the titles of my compositions, but this probably is not the right place… I would add a few words about the latter. The idea comes from an input of the excellent Venetian guitarist Leonardo De Marchi, who owns a ten-string guitar and is trying to expand the limited repertoire for this fantastic instrument. Obligatory references are Maderna's "Y después" and Narciso Yepes’s guitar. It’s a great challenge…

What projects have you got lined up for the future?
I have two projects in mind for a while now. The first is a composition for four percussionists, for unpitched percussion only, just the pleasure of pure rhythm, with no “frills”. Like a journey to the roots of my music, in which the rhythm, often complex, is a key element. Another project is a kind of small chamber opera for a couple of singers and a small ensemble, maybe with the instruments that have characterised my production so far: flute (all sizes), clarinet (all sizes), electric guitar, electronics etc. In this work I could have a small part (not a singing one of course), a little like Donatoni in "Alfred Alfred".

Can you introduce us to one of your low flute pieces?
I can only choose "Same Old Monsters", in my opinion one of the most interesting pieces I wrote. It’s a piece born from the desire to explore the exciting possibilities offered by the Kingma System bass flute, an instrument I find incredible and very inspiring.

Same Old Monsters: the title suggests that the characteristics of human violence, oppression and malice are the same over the centuries. The idea of the piece is an activity that requires attention, delicacy and commitment (the bass flute part, with its rhythmic intricacies, quarter tones and multiphonics), opposed to the obtuse brutality of the Same Old Monsters. Our antihero tries to resist and to fight back, but at the end gives up, and his voice becomes nothing but an inarticulate babble.

The first musical idea of the piece was the four-note theme that opens the flute part: B Bb E G; in other terms: H.B.E.G., that stands for Happy Birthday, Ela Gusha, and this refers to the author of Bardhezi (another piece of mine) lyrics, the poetess (Su)ela Gusha.

In Same Old Monsters, I used microtones to symbolize the uncertainty and difficulty that our anti-hero has in trying to express his/her thoughts and to assert himself/herself against the brute violence of the monsters. Besides, I love the sound of microtonal inflections of the line… The tape is the voice of the monsters. I made it using real instruments sounds, modified with various techniques and mixed with electronically processed animal sounds.

Same Old Monsters was written in 2009 for Kingma System Bass Flute and electronics. The piece is dedicated to Carla Rees, for whom it was written. The final version of the score was done with technical supervision by Carla.

A recording of this work was made in May 2011, while the première of the piece was held in East London, at The Macbeth, on July 3rd 2013, during a very special event of London’s ‘alternative classical’ scene hosted by Nonclassical. The piece is also one of Carla’s PhD case studies… What else could I ask for??!!

How would you recommend someone gets started on learning your piece?
I always ask the performers to start from the basic concept of a piece, that is to understand the internal logic of a composition, its development, the "narrative" that he/she will offer to the listeners later. Once the interpreter has internalized this well, I usually leave a large margin to the fantasy and the personality of the musician. I do not belong, in short, to that vast group of "fetishists of the score", quite common nowadays. Certainly, Same Old Monsters is the result of an accurate collaboration between composer and performer, who has created a sort of official "lectio" for interpreters, sanctioned by the beautiful recording of 2011. Nevertheless, another interpreter is free to add a personal element, a nuance I (we) did not imagine, etc..

What performances do you have coming up?
Five performances are planned so far. First of all, the gig at "The Forge" in London on February 10, where Carla and rarescale will perform the aforementioned Same Old Monsters and the première of a piece for alto flute, bassoon and electronics called Things In Jars (the title issue again…). On April 1, in Rome, there will be the première of a work for alto clarinet, commissioned by Marco Colonna. The piece, called Song F, is based on the famous and ancient theme of Folia, on which many composers have tested themselves. Then, around the end of April, the flutist Linda Wetherill will perform in New York her version of Introduction To Spooky Garden, in which the performer must play piccolo, alto flute, contrabass flute and small percussion. There is no confirmed date yet for the première of Joyce was a synthesizer, for contrabass flute and electric guitar, dedicated to a brave duo of brilliant musicians: the flutist Antonella Bini and the guitarist Silvia Cignoli, to be held probably in Milan.