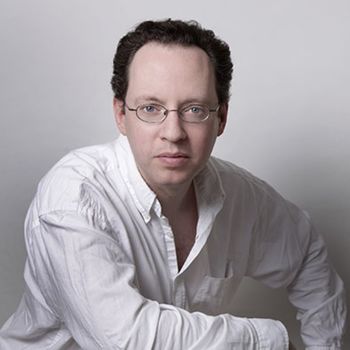 Recently appointed composer in residence of the Welsh Sinfonia, Michael Csányi-Wills graduated from the Royal Academy of Music as a pianist, but whilst there found himself increasingly drawn to composition. Since then, he has written works ranging from Chamber music to Choral and Orchestral works to film scores. His latest concert work is the first commission from the Welsh Sinfonia and is a three movement orchestral work entitled “Illusions of This World”.

Between 1997 and 2012 Michael collaborated with composer Nigel Clarke on several film scores that include Warner Brother’s films “The Little Vampire”, The Little Polar Bear” and “The Thief Lord”, as well as independent films such as “Jinnah”, “Rocket Post” and “The Baseline”. In recent years Michael has also been in demand as a composer for a range of feature documentary work and has just completed a score for “The King of Nerac” about artist and sculptor David Breuer-Weill.

As a pianist, Michael still performs and records regularly and is currently recording the complete Weinberg Violin Sonatas with Russian Violinist Yuri Kalnits the first volume of which has been released by Toccata Classics to critical acclaim. The CD won a “Diapason d”Or” in the French Magazine “Diapason” for May 2011. The second Album was released in November 2013 also to critical acclaim.

Michael was elected an Associate of the Royal Academy of Music in January 2012 and was appointed Head of Composition at the World Heart Beat Music Academy, London in January 2013.