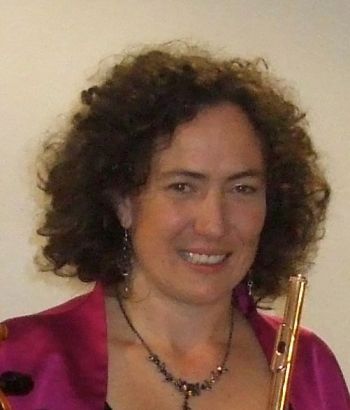 Katrina Emtage was born in Kenya but had her first musical training in Sydney. Starting the flute in the school fife and drum band at age 11 she quickly progressed, winning several competitions including being a finalist in the Australian Broadcasting Commission’s prestigious Instrumental and Vocal Competition at the age of 19. The award of a Queen Elizabeth II Silver Jubilee scholarship allowed her to continue her studies in Vienna, where she worked as a freelance musician for 13 years. During this time she completed an MA at the Vienna Academy of Music, studying with the principal flute of the Vianna Philharmonic, Wolfgang Schulz, and attended masterclasses with many other well-known flute players including Aurele Nicolet, William Bennett and Robert Dick. She has toured extensively in Europe, the USA, Australia and Asia with orchestras and chamber groups, both as soloist and as an ensemble member. With the contemporary music ensemble Klangforum Wien she played at many of the most prestigious festivals in Europe, including Darmstadt and the Salzburg Festival, and played in a production of Pierrot Lunaire at the Guggenheim Museum in New York. She also recorded the work of Hans Zender, Giacinto Scelsi and Jean Barraqué. As a founding member of the Vienna Pocket Opera she particoated in the commissioning of new music theatre works and collaborated with peter Maxwell-Davies, Simon Holt, Georg-Friedrich Haas and Beat Furrer on productions of their works. She currently teaches the flute at the Cork School of Music and the County Cork School of Music and pursues a keen interest in Irish traditional music, pottery and sailing.