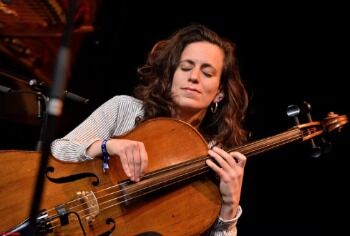 Talia Erdal (born 1991) is a cellist, singer and composer from Jerusalem, Israel.

Her musical career covers a wide range of styles. From early music and classical cello repertoire to newly written pieces, folk, jazz, rock and free improvisation, Talia enjoyed a varied and colourful career as a soloist and collaborator.

Talia is an Alan Niekirk and Trinity College scholar 2019-20 and received a scholarship from the America-Israel Cultural Foundation between 2005-2015. She was the winner of the Aviv Competitions 2015 in the category ''performance of an Israeli piece''. In 2018 she won the concerto competition of the Jerusalem Academy of Music and Dance and in 2020 she won Trinity Laban’s soloist competition.

As a composer, Talia regularly performs her music with her Dutch-Israeli group Zenith Duo and the German jazz band Der Weise Panda.

Her performance of original music in the play A Very Narrow Bridge (Chutzpah! Festival 2016, Vancouver, Canada) was nominated for a Jessie Richardson Award in the category “significant artistic achievement”.

Talia often participates in community-oriented projects such as Mekudeshet festival (“Dissolving Boundaries” journey) and the Jerusalem Street Orchestra.
Her playing and compositions were broadcasted on the German television, the BBC radio, and can often be heard at the Israeli classical radio station Kol HaMusika.


Ballade for the Death of a Dove
(I'm)Migration
Next
Previous