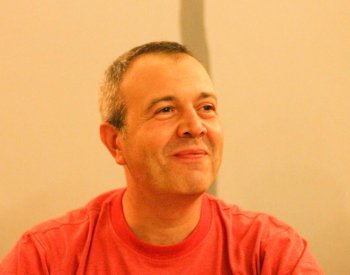 Dan Di Maggio was born in 1969. During his standard music training, he began to be involved in music cross-contamination. In 1993 he began to study computer music and multi-track recording with I. Mancini. From 2000 to 2005 he worked as writer and arranger for some groups of Italian underground scene, also working as “Hammond” organ player. Since then, he has written soundtracks, incidental music for theatre, acousmatic and electro-acoustic music.

In 2006 he wrote Ode To Eric Dolphy, a tribute to Eric Dolphy for unaccompanied bass clarinet, dedicated to the great virtuoso Harry Sparnaay. Since then he has composed for some eminent soloists, such as Susan Nigro, Carla Rees, Lisa Bost, Kathryn Ladano, Sarah Watts, Marco Colonna, Matjaz Debeljak, Akiko Kozato and some ensembles such as rarescale, New York Miniature Ensemble, Calderon Duo, Art Saxophone Association, mmm… ensemble. He has had premières in Milan, Rome, London, New York, Osaka, in Slovenia, in Canada and on the Isle of Skye in Scotland. In 2010, he released Reification, his first CD of electro-acoustic music.

Currently, Dan Di Maggio keeps on working in the field of chamber music, especially regarding music contamination, electro-acoustic music and exploration of the potential of less known and unusual instruments and ensembles.