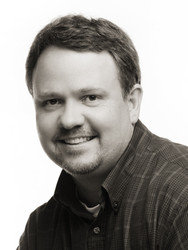 Mark Chambers (1969-2017) was an award winning composer, conductor, and performer. His compositions display both intuitive and rational qualities while exploring spiritual and theological concerns. On the surface his music can oscillate from moments of quiet reflection to lyrical expression to dramatic outbursts. On a deeper level his music exhibits highly controlled formal constraints and a non-traditional harmonic vocabulary that is informed by both serial and spectral processes. Mark was born in Greenville, SC where he began his musical training on the trumpet and then voice and music theory at Greenville County Fine Arts Center. He completed the BM in music theory and composition at Samford University and went on to study with Michael Kurek at the Blair School of Music of Vanderbilt University and Kenneth Jacobs at the University of Tennessee where he earned the MM in composition. He has subsequently earned the DMA in Music Composition at the University of Alabama where he studied composition with C. P. First, Tristan Murail, Harrison Birtwistle, and electronic music with David Durant. His music has been performed and broadcast across the U.S. and Europe by ensembles and performers such as Hugh Sung, Sato Moughalian, Carla Rees and rarescale, Duo Aksak, and Craig Hultgren. In addition to regular concert performances his music has been presented at international festivals such as the International Arts Movement, Spark, SEAMUS, MAXIS II (UK), and Pulsefield Soundscape. He was selected as a finalist in the 1st Annual Concurso Minaturas, (Spain) and other musical awards include the Victor Herbert / ASCAP award and a College Music Society Composition Award.

In 2010 he served as a panelist for the annual International Arts Movement Encounter in NYC.

He was on the composition faculty at Old Dominion University and served as the assistant Director for Arts in the Alps, a collaborative musical event near Innsbruck, Austria.