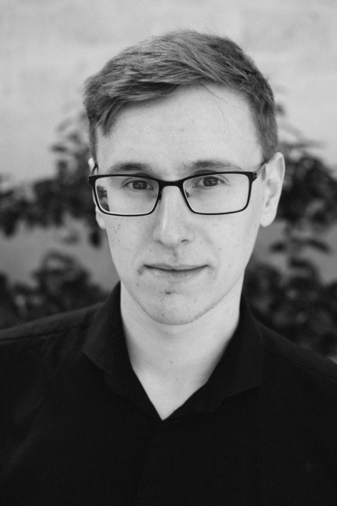 Sam Buttler (b. 1996) is a Welsh composer who embraces many musical styles and idioms. He graduated in 2017 with a BA in Music from St Peter’s College, Oxford. He then received a Distinction in his MMus in Composition at Royal Holloway, University of London with Aaron Holloway-Nahum, John Traill, and Chris Whiter in 2018. He is currently Associate Composer with The Ripieno Players. His works have been performed by the Korrigan Consort, Flö Duo, the ECCE Ensemble, and Duo Kottos.

In 2016, his work Flight from Ashes was premiered at Trinity College of Music by Grace Buttler (violin) and Irina Lyakhovskaya (piano). Sam has participated in workshops at Royal Holloway and his works have been performed around the UK and Europe. In 2018, he was selected as one of eight composers commissioned for Royal Holloway’s Distant Voices, Current Drifts project with the Royal Holloway New Music Collective. He also recently recorded a trio of choral works in St Peter’s College Chapel, Oxford with Joe Davies (conductor) and singers from the University of Oxford. Also in 2018, he was chosen to participate in the 2018 Etchings Festival with the ECCE Ensemble. Recently, he has been selected as one of the Emerging Composers at the Ludlow English Song Weekend. His music has been regularly used by the National Museum Wales: Amgueddfa Cymru in a variety of promotional material. He has upcoming projects in London, Manchester, the Scottish Borders, and Birmingham.

A Ceiling Full of Stars
Next
Previous