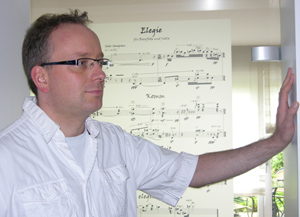 Claes Biehl was born in 1978. He studied composition with York Höller, Music Theory with Reinhardt Kretschmer, piano with Michael Endres, and computer music with Clarence Barlow at the Hochschule für Musik Köln (Cologne). In 2003 Claes was awarded the composition prize of the HfM Köln, and later that year graduated with "high honours" from the conservatory. Other awards include the Cobbett and Hurlstone Prize and the Theodore Holland Prize in Composition. In 2004 Claes embarked as a student on the MMus course at the Royal College of Music, London where he studied with David Sawer. After completing this course in 2006, Claes studied with Dai Fujikura, David Sawer, William Mival, and Michael Oliva for a Doctor of Music degree (dissertation topic: "Microtonality in the Post-Spectral Era") which he was awarded in 2011. His music has been performed in Europe and North America at venues such as the Southbank Centre, the Cadogan Hall, the Mercatorhalle Duisburg, the UK Microfest and UC San Diego, and is published by Augemus Musikverlag. As a researcher, he has given lectures and conference presentations at the Royal College of Music London, Coventry University, Trinity Laban Conservatoire of Music and Dance and at the documa Summer School.

Since 2009 Claes has been the associate composer of the ensemble rarescale. In collaboration with artistic director Carla Rees and other members of the ensemble he has been researching and developing new concepts of writing microtonal music for acoustic instruments. In 2011 Claes joined the artist collective 4Arts Krefeld which specialises in developing works of art based on intermediate synthesis concepts. Their first collaborative work "Der Himmel ist ein Nomade" (featuring text, paintings, videos, live and electronic music as well as aspects of spatialization) was premiered in 2012 to great acclaim. Claes currently works as a freelance composer and teaches composition and music theory. Upcoming projects include a new work for rarescale and the incidental music for a new production of Max Frisch’s play "Biografie: Ein Spiel" for the Aachen Theater. His music is published by Augemus Musikverlag and Tetractys Publishing