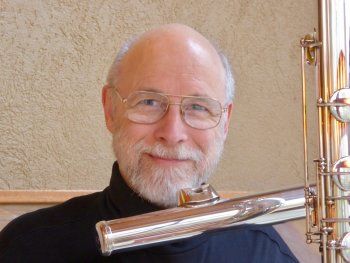 Jon was born in Ann Arbor, Michigan in 1954. After passing through Palo Alto, California and undergraduate school in Akron Ohio, he settled in Maryland, where he received his Ph.D. in electrical engineering. Jon has worked as a researcher in information retrieval and visualization, optical and signal processing, and related fields, for four decades. His resulting trophies include more than a dozen patents and a bald head.

Confined to his house for several snow days in 2003, Jon began to compose, and has resisted all calls to desist. Seven of his odd compositional children have been winners of the NFA’s Newly Published Music Competition.

Jon plays flute in the Montgomery Village Community Band (Maryland) and Tiny, his contrabass flute, in Flutes on the Brink, Flute Cocktail, and The Metropolitan Flute Orchestra, from which he draws far too much encouragement.

Jon continues his dubious contributions to science as he composes, decomposes, and plays.