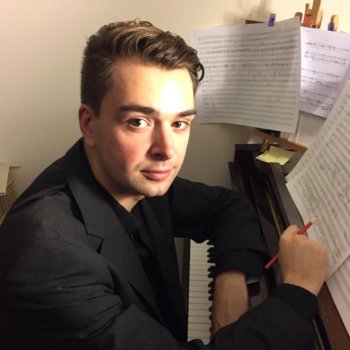 Steven Laurence Frew (b.1984) is a British composer from West Sussex. He began exploring contemporary music as a teenager and took composition lessons from Terence Allbright. He later studied at the Royal College of Music in London with David Sawer and William Mival. Steven spent several years travelling in Asia where he became fascinated by the traditional music, art and literature. In 2009 Steven was awarded a scholarship to study his Masters Degree in Advanced Composition at the Royal College of Music with Alison Kay. In addition to his academic studies, Steven has also taken lessons from Dai Fujikura, Anthony Payne and Sir Peter Maxwell Davies.

Steven’s music often explores the relationships between the visual arts and composition. He enjoys drawing inspiration from paintings and sculptures and looks for ways in which to imbed the visual forms into his musical language. Ravine (2010) and Twittering Machine (2012) are examples of this. Steven has recently started exploring electroacoustic composition and produced his first piece Manga (2017) for prepared recorder and sampler.