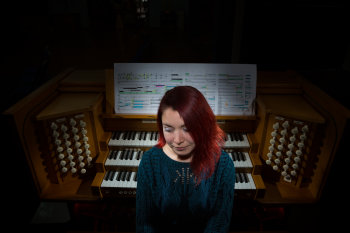 A CD of Lauren’s chamber works entitled tactile figures was released on the engraved glass label in 2012. She has since released two albums with the pan y rosas discos experimental music label (Chicago) and her work ‘concerto’ featured on the debut album of the Vocal Constructivists, ‘Walking Still’ (Innova). In 2014 she gave a tour of her organ and electronics programme throughout the UK with the support of Sound and Music and in 2015 this was followed by a duet organ and electronics album with Alistair Zaldua on the sfz music label.

12 Fragments for transverse flute
Next
Previous