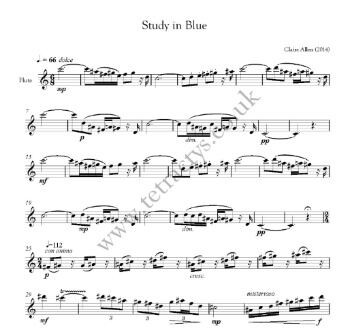 
Study in Blue is a short solo for C flute. The piece was written with melodic and durational boundaries in mind. An imposed 'box', the idea is to push its constraints by creating a sense of freedom. Its character resides in otherworldly realms.

A native of Lincolnshire with Yorkshire ties, Claire Allen began learning piano at the age of eight years, her curiosity of the instrument leading her to train as a piano technician.

She now runs a private piano teaching practice while continuing to pursue her love of composing, studying with the Open College of the Arts as well as music and psychology with the Open University.

Having also studied art previously, Claire has a desire to combine creative elements of this within future compositions.

Study in Blue was premiered by Kayleigh Glasper at the rarescale Summer School at Harlaxton Manor, Lincolnshire, on 1st August 2014