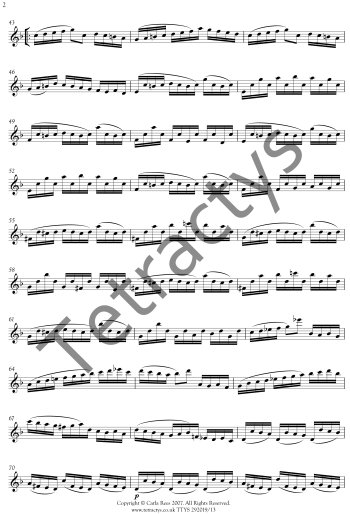 Arrangements of one kind or another have been at the heart of alto flute repertoire since Boehm's own arrangements of well-known works at the time of the instrument's development in the mid 1850s. For an instrument that lacks its own repertoire before the mid nineteenth century, adapting earlier works provides both useful practice material and a broader range of musical material.

This Allegro Assai is the final movement of Bach’s Solo Violin Sonata No. 3. The arrangement stays as closely as possible to the violin original, and was made through consulting a range of source materials. It is an ideal work for the study of good alto flute technique, using extremes of range at high velocity, which requires a good control of air speed. The piece also challenges the player with difficulties of articulation, breathing and stamina, as well as obvious problems of finger technique.

Full versions of Bach’s Sonatas and Partitas for solo violin, as well as the Cello Suites are available in arrangements for alto flute from Tetractys Publishing. Although intended for the alto flute (and transposed so that when played on the alto flute the music sounds in the original key), these arrangements may also be played on other members of the flute family.