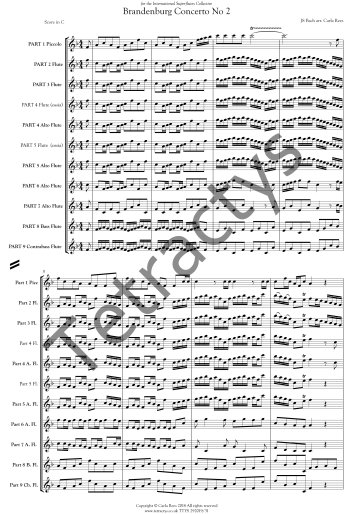 The six Brandenburg concertos form a collection of works for different combinations of solo instruments, many of which are quite unusual groupings. The original instrumentation of this concerto was high trumpet (or perhaps horn, since the writing is unusually high for the trumpet), flute, oboe and violin solo with strings and continuo. The solo group, of four instruments of roughly the same pitch tessitura, is heard against the accompanying string orchestra. The three movements are in fast, slow, fast format, with a fugue in the last movement.

In this arrangement for flutes, the trumpet part is taken on by a piccolo, which is capable of a similarly bright and penetrating sound.