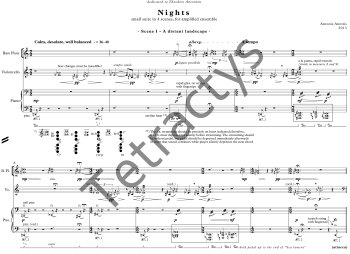 
This work was composed in July 2013 for the rarescale composition competition It consists of four short movements, all of them having a narrative – dramatic character. The “rules” that I have followed throughout my work are mostly based on the atmospheres and the soundscapes that I wanted to create and not so much in some kind of strict material organization. Nevertheless, each piece has its own unique characteristics and form. In the fourth piece, I mainly used extracts from JS Bach’s BWV 971 (Italian Concerto, 2nd Movement) which are interrupted from the flute and the cello, attempting with this way to present the antithesis between light and darkness that one can observe during the twilight hour. All three instruments make use of extended techniques, such as multiphonics on the bass flute and playing inside the piano.