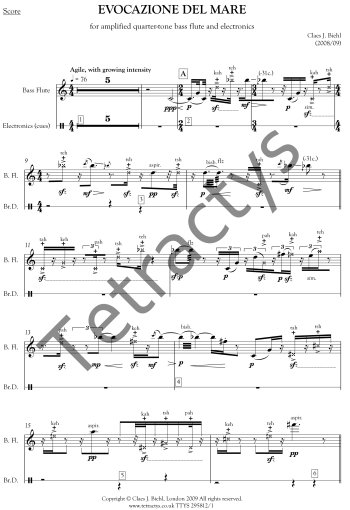 
Evocazione del mare (Evocation of the sea) marks the first of three pieces to be written for the ensemble rarescale. It received its premiere at the UK Microfest 3 at Walton on Thames on 7 March 2009.

One of the principle ideas behind this work is to explore different stages of interaction between two diverse characters, the flute and the electronics. The main dual function of the flute is to both trigger and articulate responses from the initially separate entity represented by the electronics. As the title suggests, this entity stands for an abstract form of ocean, which for me represents a mystic encompassing force rather than a real or concrete ocean.

Regarding its form, the piece could be subdivided into four major sections. The first section explores the flute's attempts to interact with the electronics. By responding to the flute's agitated impulses the electronics begin to gradually enclose the flute sounds. The second section then shows the two forces in conjunction: the flute has become integrated into the electronics. The third section depicts various types of conflict between the two entities eventually resulting in their separation. An electronic interlude leads to the final section of the piece in which the flute excitedly reflects upon its multifaceted musical material while the electronics gradually withdraw.

The musical material for this piece is organized following two main principles: (1) fractal methods provide self-affine structures on micro- and macro-levels in order to establish an organic discourse of the work; (2) the pitch material is based on two spectra complementing each other which both become subject to processes of Frequency Shifting. These processes result in complex sequences of gradually descending harmonic fields that can be heard throughout the entire piece.