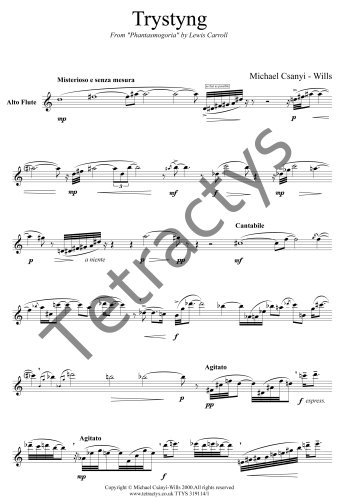 
Trystyng for Alto Flute, was written in 2000, and revised in 2012, and is inspired by Lewis Carroll’s set of poems called Phantasmagoria. The Trystyng is the first “Canto” of the set and speaks of a man’s return home to find a ghost in his house.

"The Trystyng"
by Lewis Carroll

One Winter night, at half-past nine,
Cold, tired, and cross, and muddy,
I had come home, too late to dine,
And supper, with cigars and wine,
Was waiting in the study.

There was a strangeness in the room,
And something white and wavy
Was standing near me in the gloom -
I took it for the carpet - broom
Left by that careless slavey.

But presently the thing began
To shiver and to sneeze:
On which I said " Come, come, my man!
That's a most inconsiderate plan,
Less noise there if you please!"

"I've caught a cold", the Thing replies,
"Out there upon the landing."
I turned to look in some surprise,
And there, before my very eyes,
A Little Ghost was standing!