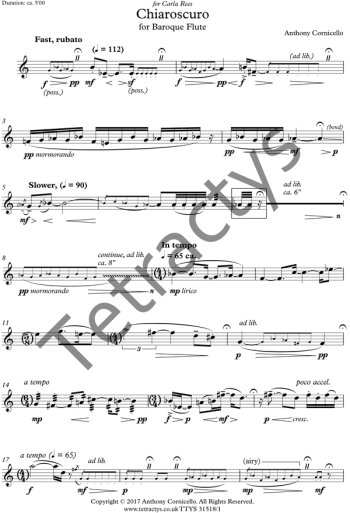 Chiaroscuro was written at the suggestion of Carla Rees, and is dedicated to her. The work is scored for Baroque Flute, which, as a result of its construction, has distinct differences between notes of different scales. So, D Major is a ‘strong’ or bright key, and notes outside that key tend to be weaker. Rather than view this as a limitation, I decided to exploit these timbral differences. As the title indicates, my composition explores the boundaries between light and dark, between clarity and obfuscation, and between structure and expression. The music was written in August 2017, and is approximately five minutes long.