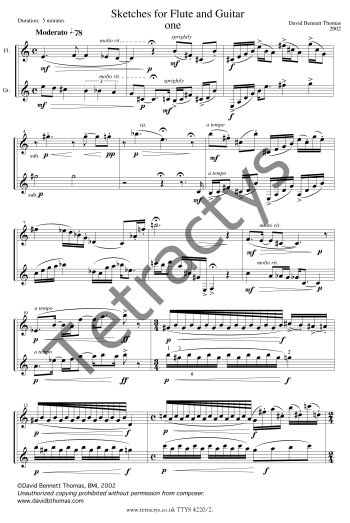 
My Sketches for Flute and Guitar were initially conceived as two-part inventions. I wanted each instrument to be of equal importance melodically, rather than use the default strumming guitar and prominent flute tune. Consequently, there are not really any chords in the guitar part at all. The pieces are to be perceived as little abstract miniatures that float by on their own terms, without necessarily having to be influenced by the flute/guitar tradition idiomatically. I could further bore you by revealing that each movement is based on a few small cells that are developed throughout, but I think you’ve heard all of that before!

My thanks to the wonderful performers Carla Rees and David Black, who always delight me with their soulfulness.