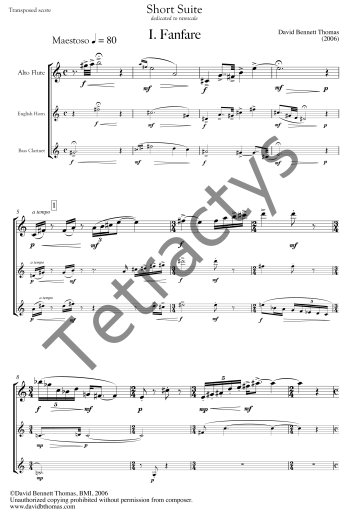 
My Short Suite was composed in the winter of 2006, for rarescale. The piece consists of 5 short movements for a wind trio consisting of alto flute, English horn, and bass clarinet. When I told a colleague that I was writing for this instrumentation, which consists entirely of instruments that are often the secondary instruments that musicians play, he said "Wow, they must be pretty confident, to all be playing the doubles." I had the idea of calling the piece Mixed Doubles, but in the end, that didn't seem to fit the piece.
All of the pieces are very short, and have an improvisational, whimsical nature. I've always enjoyed the challenge of making a piece happen in a very short amount of time, and notes. The first movement is an opening Fanfare, full of dotted rhythms, with a general 'maestoso' sort of feeling. This is followed by Study in Sevenths, which is in no way restricted to sevenths, but does use them prominently in its thematic material. The third movement, Spring River Morning, alternates between warbling and unison writing in the trio. Following is The Chase, which, as you can guess, is a fast movement in which all three instruments run the range of their instruments in a bit of a frantic manner. The concluding movement, Forlorn, depicts a feeling of isolation and loneliness, always a great way to end a piece!