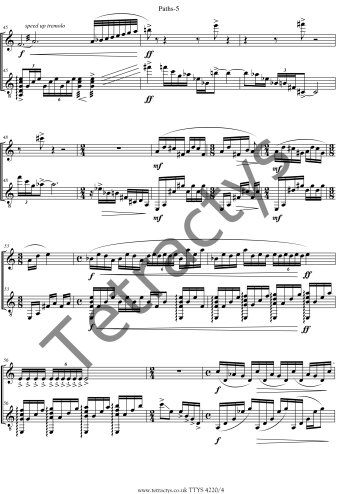 
Paths was composed for Carla Rees and David Black in the summer of 2009. The piece is comprised of three movements, each of which I hope is idiomatically written for the instruments. I've written for alto flute a number of times, thanks largely to my friendship with Carla. This is my third time writing for guitar, and each time I feel that I have been able to get further inside this instrument's possibilities. I've never played the guitar in my life, but I wrote the whole thing with a guitar in my hands, awkwardly checking every voicing. It was quite a fun challenge to be away from the piano, and to put together a piece without any of my normal piano tricks.

The first movement is marked Energetic, eager. It opens with short outbursts from the instruments that are allowed to hang in the air and slowly dissolve. A section with more forward motion then begins with lots of arpeggiations and pulsations from the guitar, and repeating motives in the alto flute. Throughout the rest of the movement I play on the idea of repeating notes in the instruments to create washy effects, always with a forward drive.

The second movement is marked Reflective, ruminating. There are few sounds more beautiful than hearing Carla Rees play beautiful, slow, low melodies on a low flute. The movement opens with this sort of idea, which ultimately leads into an E minor song-like section, then to a more rapid 3/8 section. The E minor song returns, and ends the movement.

The third movement is marked Breezy, bouyant. My idea for the opening of this piece was to have three distinct motivic ideas that are interjected, bounced back and forth, and used to interrupt each other unpredictably. This is followed by a section of rapid repeated notes in the guitar, which leads to the first hint of a tune in the alto flute. The middle section is filled with short repeated fragments in almost a minimalistic sense, which eventually leads back to the tune which concludes the piece.