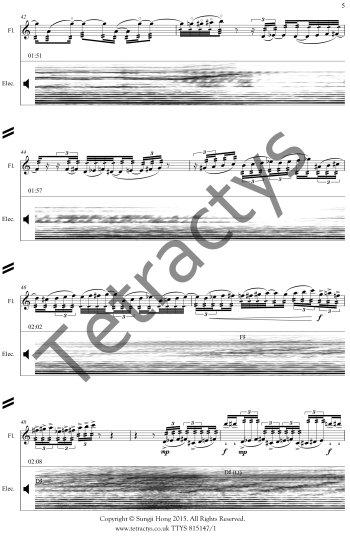 In SHINE, written for flute and electronics, the flute solo part consists of three ideas as follows: ascending tremolo scales, quiet timbral trills and staccati. The whole piece develops around or between these three gestures turning on themselves or going through transformations.

This work is the result of an ongoing collaboration with Carla Rees. She provided studio recordings of the flute solo part I composed. I made use of her recording as the main sound sources on the tape in order to create a unified sonic world between the electronic part and instrumental part.

SHINE for flute and electronics written for flutist Carla Rees was supported by New Music USA. It was completed in early 2015 and was first performed by Carla Rees on 15 April 2015 at The Forge in London.