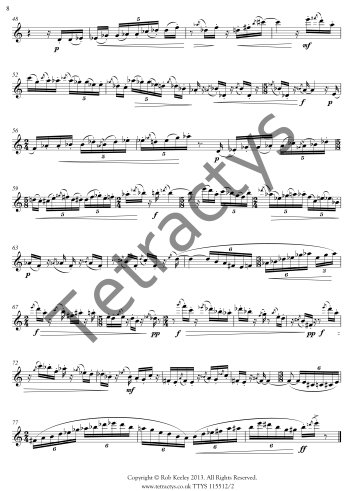 
I wrote this in 2013 and like much of my work, is composed in a relatively traditional manner, the music made up of contrasting motives and themes and their development.

The piece avoids any extended techniques: I am 'intensely relaxed' about using the 'normal' sounds of a flute, which for me are still some of the most exciting sounds a composer can write for. Two fast movements, in which a main, vigorous 'leaping' idea alternates with smoother, more lyrical music, surround an Andante, in which these two elements continue to hold a conversation, the even crotchets always in danger of being interrupted, like two speakers each trying to get a word in....

Sonatina was premiered by Carla Rees at All Saints Church, Kingston, on 26 January 2015