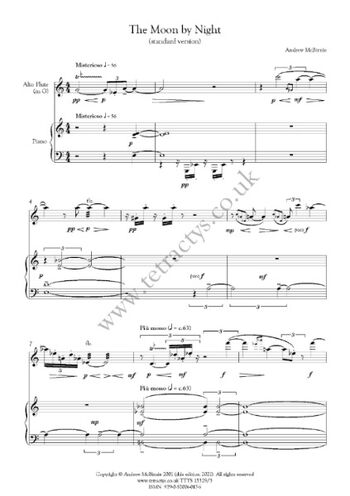 Andrew McBirnie - The Moon by Night


The Moon by Night was composed in November/December 2001 for Carla Rees.

An appropriately nocturnal, atmospheric piece, it is based on a Scottish metrical psalm tune, alternately known by the titles ‘Dundee’ or ‘French’, which originated in the Scottish Psalter of 1615 and is most often sung to the words of Psalm 121 (‘I to the hills will lift mine eyes…’). The title comes from the third stanza:

The moon by night thee shall not smite,
nor yet the sun by day.

The original version of this piece was written for Kingma System alto flute and piano and was premiered by Carla Rees and Charles Wiffen on 19 March 2002 at The Warehouse, London. An alternative version for standard (closed hole) alto flute is also available.

A version for alto flute and guitar was made in 2014 and premiered by rarescale at Aston Tirrold United Reformed Church, Oxfordshire, on 21 June 2014.