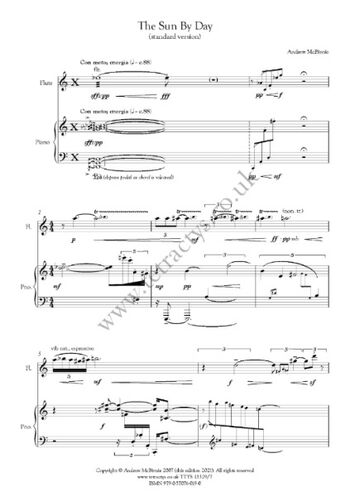 Andrew McBirnie - The Sun by Day

The Sun by Day for Kingma System flute and piano, was written for Carla Rees in 2007, to celebrate the fifth anniversary of rarescale.

Joyous, energetic, even slightly crazy in mood, it was composed as a companion piece to ‘The Moon by Night’ for alto flute. Like the earlier work, it is based on a Scottish metrical psalm tune, alternately known by the titles ‘Dundee’ or ‘French’, which originated in the Scottish Psalter of 1615 and is most often sung to the words of Psalm 121 (‘I to the hills will lift mine eyes…’). The title comes from the third stanza:

The moon by night thee shall not smite,
nor yet the sun by day.