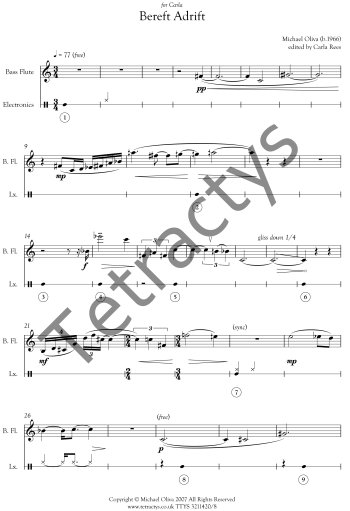 I felt a Funeral, in my Brain,
And Mourners to and fro
Kept treading - treading - till it seemed
That Sense was breaking through -
And when they all were seated,
A Service, like a Drum -
Kept beating - beating - till I thought
My mind was going numb -
And then I heard them lift a Box
And creak across my Soul
With those same Boots of Lead, again,
Then Space - began to toll,
As all the Heavens were a Bell,
And Being, but an Ear,
And I, and Silence, some strange Race
Wrecked, solitary, here -
And then a Plank in Reason, broke,
And I dropped down, and down -
And hit a World, at every plunge,
And Finished knowing - then -
Emily Dickinson, Poems (380)

Bereft Adrift was composed in 2007 for Carla Rees’ new Kingma System upright bass flute. The piece is a satellite work to Michael Oliva’s 2006 opera The Girl Who Liked to be Thrown Around.

Bass Flute
This piece requires a full Kingma System quartertone bass flute to be realised effectively, although another quartertone key system instrument may be substituted. The piece cannot be performed on a standard bass flute, since it is essential that the quartertones are accurately pitched and identical in colour to the standard notes.

Electronics
The electronic part takes the form of triggers (indicated in the score) for a Max/MSP patch which is operated by a separate performer seated at a mixing desk in a suitable position in the auditorium. As well as triggering the patch this performer should ensure an even balance between the flute and electronics.