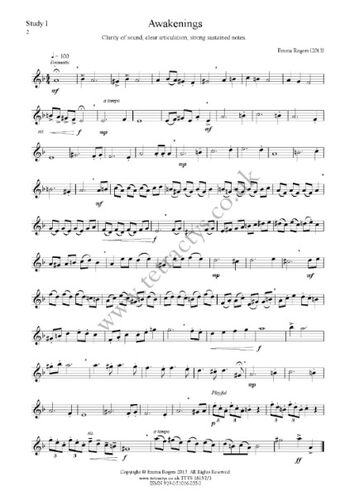 
The Big Picture is a series of studies of varying difficulty for alto flute. There are essentially four studies; however, there are two versions of each. The second version of each study is a considerably more advanced rendition that builds on the ideas that were introduced in the first version. The studies ask the performer to take the larger picture of the work into account by looking at the musical aspects of each study as well as the technical elements associated with the alto flute. The names of the individual studies form the opening of a stanza, which is completed on the back page. This stanza is included to encourage performers to always look at the ‘The Big Picture’ of a work. The first four studies are designed for flutists who are familiar with the C flute, yet are picking up alto for the first time and wish to ‘iron out the nuts and bolts’ of handling the larger instrument. The last four studies are for more advanced players and may also be used as concert studies.

The Big Picture was composed for Peter Sheridan, who gave the premiere in Melbourne, Australia on the 20 July 2013.