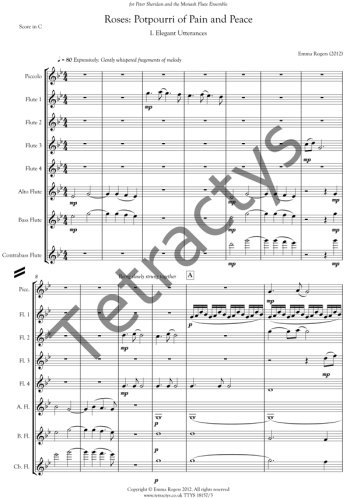 
This work explores the notion of being simultaneously happy and sad. It draws from the imagery of the rose, particularly the blood red rose that is frequently present at events that encompass the two emotional extremes such as funerals and weddings.

Roses: Potpourri of Pain and Peace was premiered by Peter Sheridan and the Monash Flute Ensemble at Monash University in 2012. It has since been performed at the Australian Flute Festival in Canberra (2013) and in America. The Work was recoded by Move Records and is available on the album Fantasie Australis.