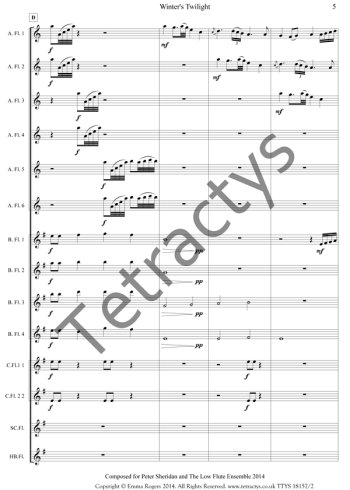 
Inspired by my last four years of high school. The school was located next to Sherbrook Forest in the Dandenong Ranges, Melbourne Australia. During the coldest days of the year the forest would be blanketed in snow, every tree, every footstep, every breath of wind became different, covered in beauty that could never be experienced at the crowded commercial snow resorts. It was in the memories of this environment that the sounds of the low flutes come to life. This piece still has the well-known character of the concert flute but delves into a world full of unheard beauty.

Winter’s Twilight was premiered at Monash University in 2014 performed by Peter Sheridan and The Monash Flute Ensemble. It was recorded by Wirripang and is available on the album ‘Labyrinths of Lowness’.