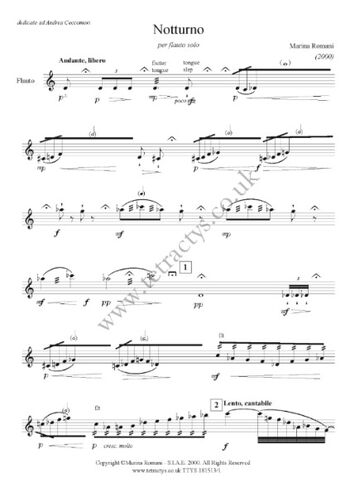 Notturno is in a free form, as it is in the character of a prelude. The title Notturno intends to suggest the character of the piece, its expressiveness. Nocturne indicates everything that is spiritually alive but impalpable, everything that grows and lives throbbing in the dark. It is the soul and the spirit, which becomes a real object in the breath and then disappears into the air in spirals of increasingly rarefied and distant sounds. The composition explores the sound and expressive skills of the instrument. The absence of tempo marks indicates the flexible nature of the rhythm in favour of a certain freedom of musical interpretation on the part of the player. It features rhythmic and melodic motifs that recur through the piece. It encompasses a huge range and makes use of wide intervals and fast dynamic changes.

The piece is dedicated to Andrea Ceccomori.