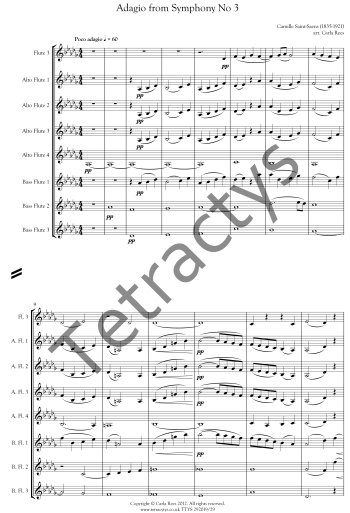 
Camille Saint-Saens was a French composer and keyboard player. He was a child prodigy, who studied at the Paris Conservatoire and became organist at Eglise St Merri and later at La Madeleine in Paris. As a composer, his works tended towards the traditional, although he was reported to have had a strong interest in the new music trends of his time.

The Third Symphony was written in 1886, and is nicknamed the Organ Symphony as a result of its prominent organ part in two of the four movements, which is unusual in symphonic writing. The symphony, Saint-Saens’ last, begins in C minor, but ends in the major. The slow movement, presented here in an arrangement for flutes, is in the key of D flat, an unusual semitone shift from the home key and perhaps demonstrative of Saint-Saens’ interest in new approaches to traditional forms. The symphony was commissioned by the Royal Philharmonic Society, and dedicated to the memory of Liszt.