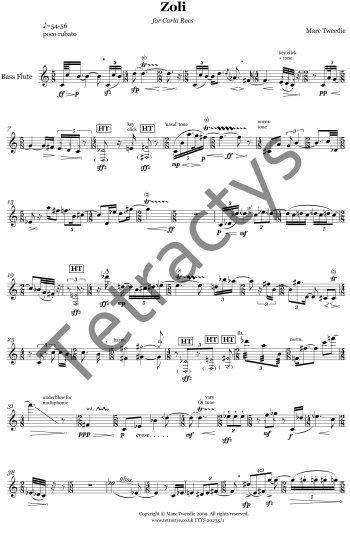 
Written in 2009, Zoli was inspired by the novel of the same name written by acclaimed Irish author Colum McCann, which tells the story of a Slovak-Romani woman, from the 1930's to her death.

The influence of folk-song on the narrative of the novel was a starting point for the work, drawing on instruments (particularly the Bulgarian kaval) and techniques found in Bulgarian music.

Timbral, microtonal, ornamental and contrapuntal devices exert their influence on the piece, as do the developmental and structural preoccupations of Varèse and Debussy.

Zoli was premiered by Carla Rees at Shoreditch Church, London on 28 November 2009