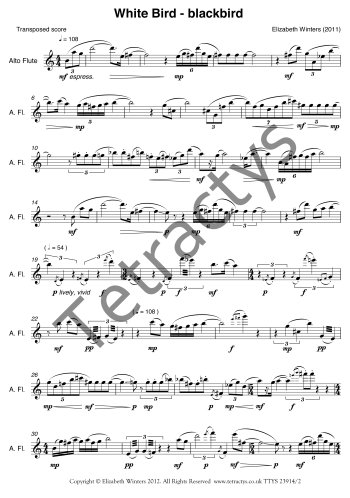 
White Bird - Blackbird can best be described by imagining the following scenario. A person is gazing at a photo of a white bird, exotic and rare, which the photographer has travelled for miles to capture in a perfect shot. Outside the window, a small blackbird is hopping around on the dirty pavement. At first, the person doesn’t notice the blackbird, and even when he does he quickly returns to his picture. The blackbird has no interest for him, when he has such a perfect photo to gaze at. However, the antics of the blackbird eventually capture the person’s attention and gradually draw him away from his photo. The white bird starts to seem rather fake in comparison to the blackbird. Finally, the person is transfixed by the blackbird – and the photo is forgotten.

From the moment the person first notices the blackbird; both ‘birds’ are always present in the music. As one is focused on, the other is still present in the background. As the piece progresses, the blackbird begins to dominate the music becoming even more vivid and alive, while the white bird material, reduced to only a few pitches, almost disappears by the end.