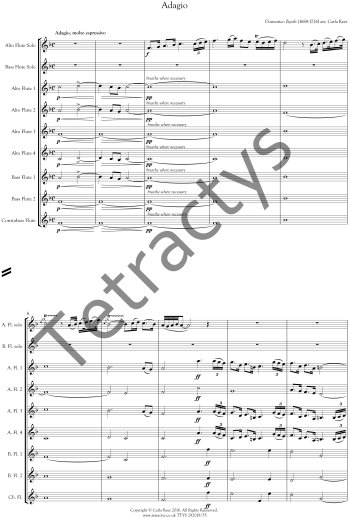 
Zipoli was an Italian Jesuit missionary who travelled to South America to carry out his religious work, settling in Argentina in 1716. He is best known for his keyboard works, and his vocal music is becoming more and more well known. He had studied in Naples with Alessandro Scarlatti but the relationship was an uneasy one and he left to study instead with Pasquini in Bologna.

Little is known about the Adagio, which is scored for oboe, cello, organ and orchestra. However, the same melodic material appears in the first part of the Sonate d’intavolatura written in 1716 for organ, under the title Toccata All’Elevazione. It is likely to have been written for the church, since the title relates to a part of the liturgy, and it was written while Zipoli was organist at the Jesuit church in Rome. The Adagio is rescored version of this piece, made by Francesco Giovannini and first published in 1964. It is possible this piece was an influence on Ennio Morricone’s famous piece Gabriel’s Oboe from the film soundtrack for The Mission.

This arrangement for flutes provides solo roles for the alto and bass flute, accompanied by a low flute ensemble.